Although the weather has got a little chilly, things have certainly been heating up in school! As I write this, the Christmas decorations are going up, reports are being completed and the Year 8s have finished their trial exams. In short, it’s clear we are getting towards Christmas!

School remains remarkably busy with a huge variety of sporting events which Mrs Cowd will report upon, and many fixtures still remaining.

Having watched both Nursery and Pre-Prep practise their nativity and play, I can promise that there are many great events to still enjoy before we break up.

Keep warm and have a great weekend.

Our U.12 Hockey Team qualified to compete in the IAPS U.12 National Finals, which took place in Ipswich on the 24th November. The finals hosts the top 24 schools in the country, so Daneshill were honoured to play against some of the strongest hockey schools in the UK. Knowing the competition would be fierce, the girls worked hard to ensure they were ready and took part in daily training sessions at school.

The girls started their campaign brilliantly, winning their first match against Millfield convincingly. We were dominant in the matches which followed and displayed courage and vigour throughout. We were top of the table by the end of the pool stages along with 3 other schools so it came down to goal difference. Sadly, Daneshill did not make it through to the cup competition due to us conceding one goal. Not deflated at all, the girls whipped up some energy and went out hard in the games which followed.

Overall, we finished in 11th place which is an outstanding achievement for a relatively small school like Daneshill. All credit to the girls who played full of heart and passion. We showed team spirit and resilience throughout and surpassed all expectations. I am extremely proud of all of them.

Huge thanks also to the team of parent supporters and Mr Takher who left at the crack of dawn, travelled for 3 hours and braved the artic conditions to support the team. It was very much appreciated.

Last Saturday, 25th November, five Daneshill pupils travelled to Solihull to compete in the British Biathlon Championships 2017. The pupils had qualified after competing at preliminary rounds earlier in the year.

The biathlon consists of an 800m race and a 50m freestyle swim. 800 pupils attended the event from U10 level to adult. The Daneshill team had trained incredibly hard to get ready for the competition, consisting of early morning, evening and weekend running and swimming sessions.

After an outstanding 800m race, in which she took 14 seconds off her previous PB, Saffia Rougier in Year 5 became the U.10 British Champion 2017! Saffy’s times were:

Saffy swims for Basingstoke Blue Fins swimming club. She is one of the club’s top swimmers and is one of the best swimmers for her age group in the country at present. 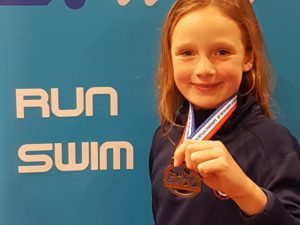 Another outstanding achievement came from Nicholas Thomas in Year 6, who achieved a bronze medal in the U.11 group. He also accomplished two PB’s. Nicholas achieved the following times:

Nicholas runs for Basingstoke Athletics Club and has won all of his U.11 races so far this term. Nicholas also trains with Basingstoke Blue Fins Swimming Club.

To have two national medallists from one school is exceptional.

Well done to all.

Years 3 and 4 stepped under the floorboards and into the enchanting world of The Borrowers this week when they visited The Watermill Theatre to watch Mary Norton’s classic stories brought to life. Clever, resourceful and only four inches tall, the Borrowers are forced to leave their cosy home under the floorboards of a huge house and face the perils of the outside world.

This was an innovative production that used all manner of theatrical devices to fire the imagination and delight its young audience. The pupils were spellbound as they watched the magical adventures unfold, being especially enthralled by the enormous props!

Year 3 and 4 displayed impeccable theatre etiquette, and the interval ice-creams certainly went down a treat! Do, however, keep an eye out for children lifting up the carpet and getting to work with a screwdriver!

It’s beginning to feel a lot like Christmas here in the Pre Prep. The tree is up and our little elves are busy making decorations for their classrooms.

On Wednesday we had the pleasure of watching the Nursery perform their Nativity. As we entered the building the Pre-Prep were greeted with warm smiles from Mary and Joseph and the rest of the cast. It was clear how hard they had all worked as every line and song was performed with such gusto and enjoyment.

This set the bar high for Reception, Year 1 & Year 2 as it was their turn to entertain the Nursery on Friday. This was the first time that the whole ensemble had been in costume and it was wonderful to see the transformation and enthusiasm on their faces. All that remains now are our final shows next week, we look forward to seeing everybody at the BBC (Bethlehem Broadcasting Company) on Wednesday and Thursday. Let the show begin!